The Play That Goes Wrong

Mischief Theatre’s The Play That Goes Wrong has become a long-running and Olivier award-winning hit in the West End and this week, the chaos returns to Milton Keynes Theatre on its latest UK tour.

It’s not often you go to the theatre expecting things to go wrong but that’s the point of this show. And it certainly delivers! From the moment you enter the theatre, you’re immersed in the world of the most disastrous ‘am dram’ production you’ve ever witnessed as Cornley Polytechnic Drama Society present Murder At Haversham Manor.

But what makes this production hilarious and endearing is the earnest commitment of the ‘actors’ to ‘the show must go on’. And it does indeed carry on, despite a multitude of disasters from sets falling apart to missing props, unconvincing corpses and even members of the cast having to be replaced mid-show.

From forgotten lines to collapsing sets, missing props and over-acting, anyone who's been to an am dram show will be able to relate to this show and there were as many laugh out loud moments as you might expect for a pantomime. Except it's definitely "not a pantomime" as the 'Director' who's playing Inspector Carter shouts at an audience member at one point..

The production is utterly convincing in its premise and it’s only afterwards that you reflect on how talented the cast are to carry off such a believably ‘bad” performance.

The slapstick comedy must require impeccable timing combined with a high level of energy, and at times the script requires some very clever delivery – one of the funniest points of the first half sees two characters’ lines get ‘out of sync’ and they end up answering questions that have not yet been asked in a ‘Two Ronnies’ style.

Each of the cast members delivers a brilliant performance but special mention must go to Colin Burnicle as Chris Bean, the theatre director whose opening speech is hilarious, and his role as Inspector Carter includes a brilliant Basil Fawlty-esque moment when he can’t find a crucial prop. There are brilliantly bad performances, too, from Kazeem Tosin Amore as (Robert Grove playing) Thomas Collymore and Edi De Melo who plays ‘theatrical newcomer’ Max Bennett, with a real flare for over-acting. Damian James as Dennis who plays Perkins is very funny and Aisha Numah as Sandra playing Florence Colleymoore seems to have a very high pain tolerance as she is on the receiving end of a lot of mishaps, Gabriel Paul (as soundman Trevor) and Beth Lilley (as set designer Annie) are also brilliant.

As an audience you are immersed completely in the world of Cornley Poly Drama Society – even the show programme is written as if it’s for the murder mystery production and you find yourself willing on the characters on stage to get through it as their world literally comes crumbling down around them.

This is a welcome return to Milton Keynes Theatre for the show which was a big hit last time and has been playing sold-out performances this week with a new cast. Having seen both performances, this production felt confident and very tightly choreographed with some of the funniest moments flowing very naturally out of the ensuing chaos.

While the audience clearly loved the descent into slapstick at the climax of the show, it was the more subtle moments which I found the funniest because it’s so relatable to anyone who has performed on stage.  This show will be a hit with anyone, whether or not they’ve ever found themselves treading the boards, and although the idea of a play that goes wrong might sound a bit contrived this is a show like no other that will have you genuinely laughing out loud. 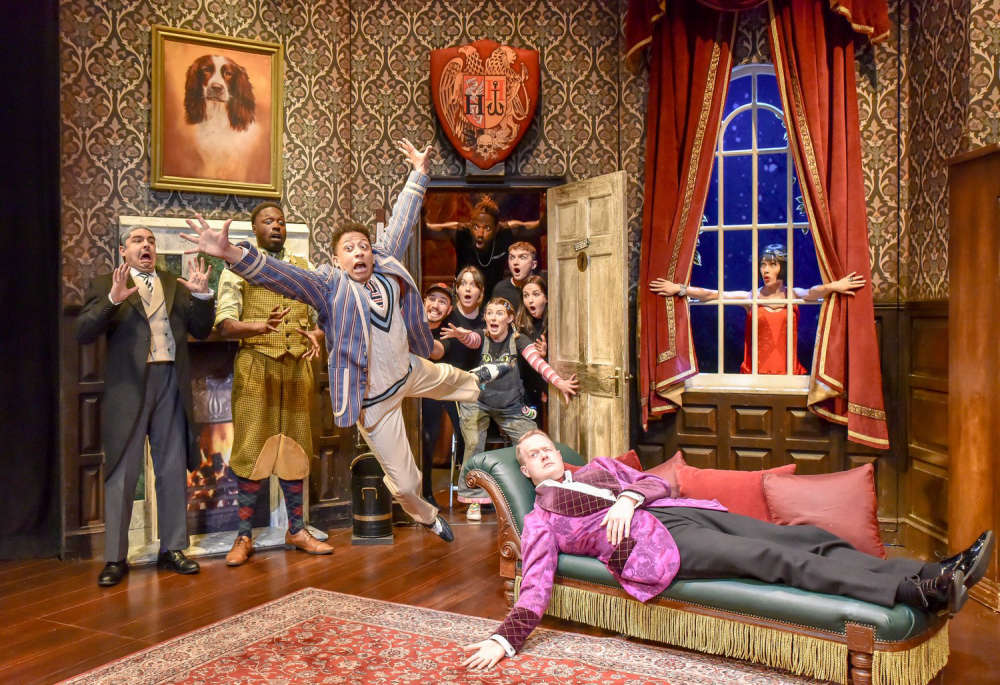