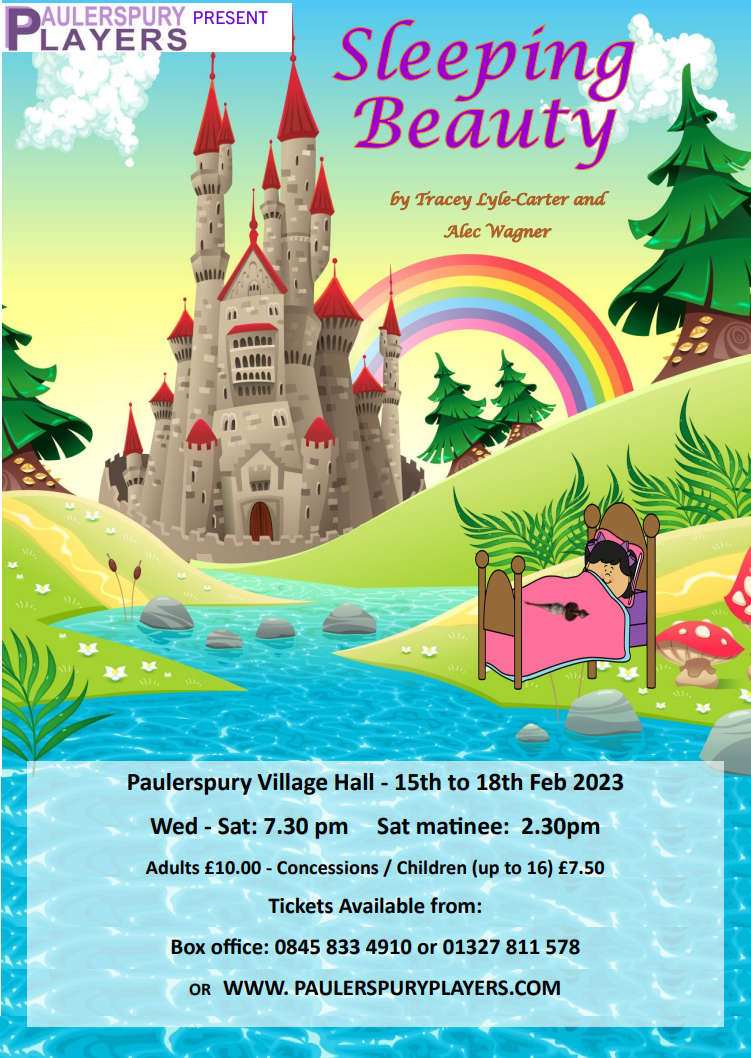 More Information (Revolution Radio is not responsible for external websites)

Sleeping Beauty is a traditional pantomime full of jokes (from the court jester amongst others) and slapstick.

Sleeping Beauty, the King and Queen, Nursey Nora (the Dame) and her son, Muddles (the Court Jester) are just some of the characters.

The story is one that everyone knows but with a few twists and turns along the way.  Come along and join in the fun with an evening of songs, music, comedy and adventure.

We do need you to boo Carabosse and Pranx (the baddies) or who knows what might happen.

An enjoyable evening is guaranteed!!

About the Paulerspury Players

Paulerspury Players are a well well-known local amateur dramatics group that raises money for local good causes. Formed in 1988 we were almost exclusively drawn from Paulerspury Parish with one or two from neighbouring villages. Over time our Membership became drawn from far and wide, such was the attraction of our shows and our reputation for ‘having fun raising funds’.

Over that time, we have raised over £75,000 for organisations such as MacMillan nurses at NGH, Northamptonshire Young Carers, schools in Towcester and the Towcester Mayors fund. There are still many cast and  chorus from Paulerspury in current productions, with the rest coming from miles around! It is a testament to our sustainability and the hard work and  enthusiasm put in by our Members. It is rare that an amateur dramatics group survives this long, let alone produces successful shows and profits as we have.

Our shows have benefited so many young people and adults since our beginnings in 1988, not only from money raised but the experiences of taking part in community shows. We now see some of our early child actors grown up, married and with children of their own. Long may The Players flourish and maintain our well established traditions!

More details for this venue

The event runs from 12:00pm to 1:00pm on the following dates.
Select a date to add this event to your calendar app.