The Cher Show is bringing all the glamour and sass of the life of music's original diva to Milton Keynes Theatre.

But Cher is too much of a star to be played by just one person - three actors take on the role, representing different stages of her life and career and all singing and acting at the same time.  And this unusual way of telling the story sets the tone for the whole show which is as unique as Cher herself.

With a dazzling light show and massive sound system it feels like a big arena concert alongside impeccable staging from two Strictly stars – direction from Dame Arlene Phillips DBE and choreography from Oti Mabuse.  The costumes also have star credentials, created by SIX and In The Heights designer Gabriella Slade, there's some very SIX-esque leather outfits for the three Chers alongside some of her most iconic looks.

The story is pacey with plenty of musical performances with 35 hits including Believe, I Got You Babe, Strong Enough and The Shoop Shoop Song and a great sing-along finale that will get you on your feet with a brilliant megamix of all Cher's hits.

From a young child with big dreams, the shy daughter of an Armenian American truck driver, to the dizzying heights of global stardom, The Cher Show tells the incredible story of Cher’s meteoric rise to fame. Cher takes the audience by the hand and introduces them to the influential people in her life, from her mother and Sonny Bono, to fashion designer and costumier Bob Mackie. It shows how she battled the men who underestimated her, fought the conventions and, above all, was a trailblazer for independence.

The show doesn't shy away from the darker points of Cher's life - the lows as well as the highs and her turbulent relationship with Sonny, who 'discovered' her but cut her out of her own contract.  But the 'Queen of Reinvention' keeps bouncing back and becomes the only artist in history to have a number one hit in America in six consecutive decades.

There are outstanding performances from all three Chers - Millie O’Connell as Babe, the younger years of her life as she meets Sonny and has her first hit with I've Got You Babe, Debbie Kurup as Star (played by understudy Samantha Ivey on opening night) takes the story through the seventies, her comedy show on Vegas and split with Sonny and Danielle Steers as Lady takes it through the eighties and nineties with Cher's success as an Oscar winning actor and musical reinvention. Lucas Rush as Sonny Bono has fantastic charisma and stage presence, making it easy to see why Cher fell for him, and their comedy double act together has great timing.

Cher has herself been involved with and given her blessing to this show and behind the glitz and entertainment, there's a lot of honesty and an inspiring message to never give up chasing your dreams and believing in yourself.

Diwali 2022
The cast of The Cher Show, credit Pamela Raith 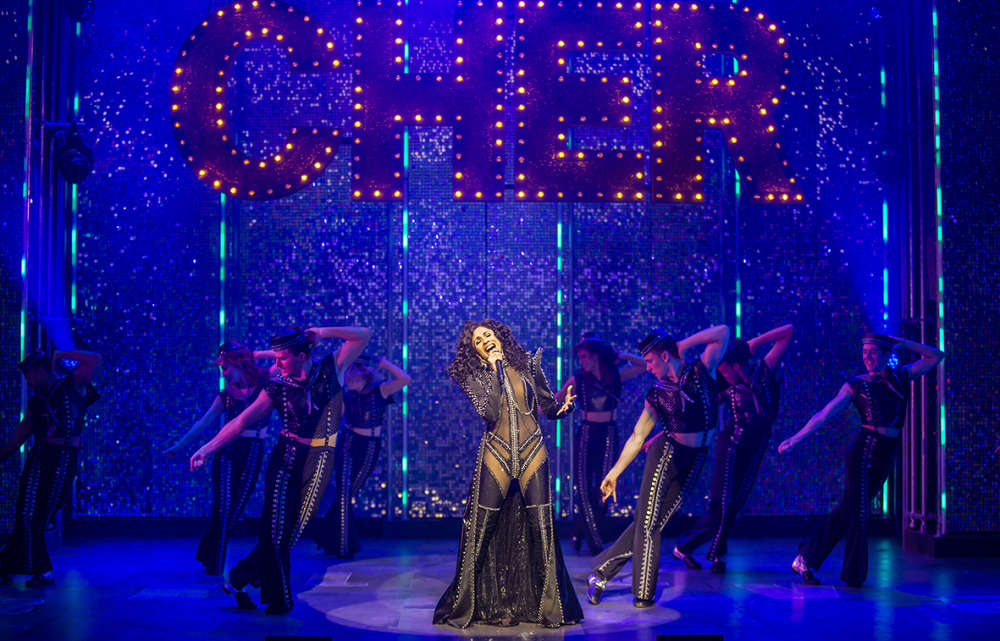