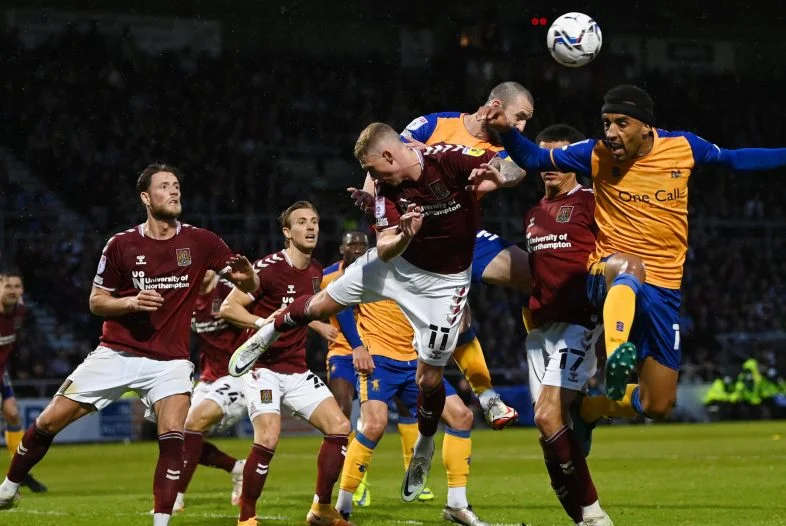 Northampton Town’s hopes of promotion to League 1 are over after a defeat by Mansfield Town in the play-offs.

Despite a possible offside in the build-up against Stephen Quinn, Stephen McLaughlin’s goal stood to give Mansfield a 1-0 lead at Sixfields, adding to a 2-1 first leg win for the Stags in Nottinghamshire on Saturday (14/05) night.

From there, Mansfield kept the Cobblers out, closing the game out to book a place at Wembley in the play-off final against Port Vale or Swindon Town later this month.

Northampton, meanwhile, were left with further irritation, having been beaten to automatic promotion by Bristol Rovers in extraordinary fashion on the final day and now defeated in the play-off skirmish as their promotion hopes were washed away on a damp night at Sixfields.

The home side had begun on the front foot, with Josh Eppiah seeing an early header repelled by away goalkeeper Nathan Bishop.

A lively opening phase saw most of the game played in Mansfield’s half, though in truth, Northampton were struggling to turn this into tangible opportunities.

With just over half an hour played, however, Northampton’s task became harder when they fell behind.

The Cobblers were left unimpressed when an offside Quinn made a run to meet a pass before stopping, allowing Elliot Hewitt to run onto the ball and cross for McLaughlin to tap past Liam Roberts.

Northampton attempted to respond. Bishop got out of his goal to beat Eppiah to a through-pass, Fraser Horsfall had a penalty shout against ex-Cobbler John-Joe O’Toole rejected and Sam Hoskins fired a strike over.

The majority of the second half would follow a repetitive pattern, with Northampton enjoying a lot of possession without being able to cut through an organised Mansfield backline. A penalty appeal being turned down also didn’t help.

Half chances from substitute Chanka Zimba and Louis Appere were the best the home side could ultimately manage, and ultimately time would run out on the home side’s attempts to complete their comeback as Mansfield booked their place at Wembley.