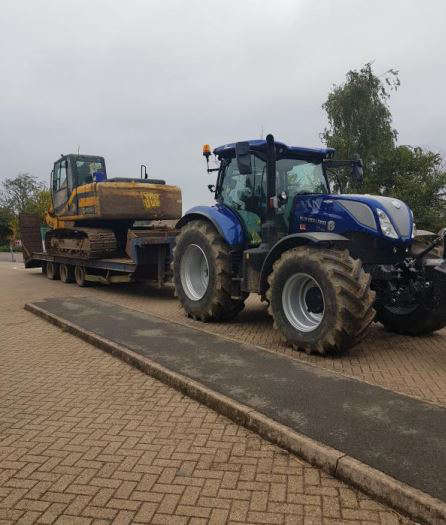 Members of the farming community in Northamptonshire are being encouraged to ensure their vehicles are roadworthy when driving on the county’s road network.

Officers from the Safer Roads Team have issued the timely reminder following the conviction of a 22-year-old farmer who towed a trailer with several defects through Crick.

Edward Greenaway of Rugby Road, Crick, was stopped by Northamptonshire Police on October 19 last year, as he transported a large JCB digger on a trailer through the village, which has a weight limit of 7.5 tonnes.

The tractor and laden trailer were taken to the DVSA (Driver and Vehicle Standards Agency) weighbridge at Crick where it was inspected by Northamptonshire Police and DVSA officers and found to be a combined weight of 33 tonnes.

In addition to being more than four times over the weight limit permitted for that specific road, the trailer also had 10 dangerous defects which required immediate prohibition including an insecure load, illegal tyres, and no rear lights.

Of the trailer’s 12 tyres - seven had little or no tread, one was worn through to the cords and two were deflated. In addition to this, the trailer’s handbrake was inoperative, the nearside indicator did not work, the suspension on one side was broken and the JCB bucket had not been secured to the trailer bed.

Greenaway was later charged with driving a New Holland Tractor dangerously, due to the trailer’s poor condition.

On April 22, he pleaded guilty to the offence at Northampton Magistrates’ Court and received a 12-month disqualification with a requirement to pass an extended test and ordered to pay £523 in fines and costs. 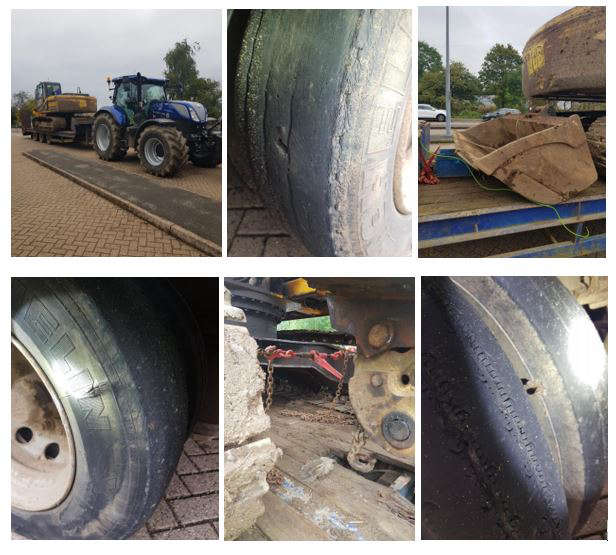 PC Mo Allsopp-Clarke of Northamptonshire Police’s Safer Roads Team said: “Due to its dangerous condition, which would have been obvious to Greenaway, this trailer should never have been driven on the road.

“To hold a driving licence is a privilege and a responsibility, so it is disappointing that Greenaway was not only willing to jeopardise his own livelihood, but more importantly, willing to put the safety of others at risk.

“We would urge anyone working in the farming community to ensure they check and maintain all vehicles and machinery to make sure they remain in a roadworthy condition before using the roads.

“We would also ask all drivers carrying heavy loads to ensure they are secured before setting off and to check they remain secure during the journey at regular intervals.”