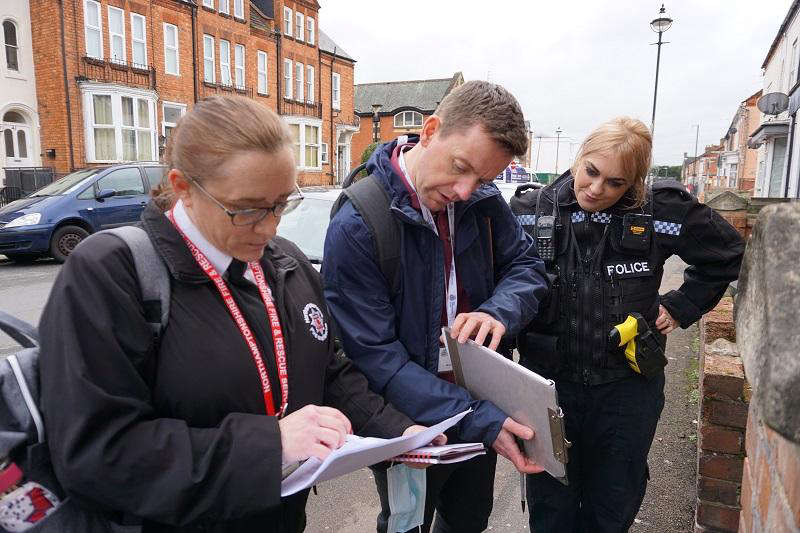 Poor housing conditions, unlicensed HMOs, fly-tipping and fire safety were among the issues tackled during three days of action in Semilong in Northampton.

The Council’s housing enforcement officers identified 50 properties that they believe could be operating as unlicensed HMOs (Houses in Multiple Occupation), and will now carry out further investigations and visits to ensure they meet acceptable standards and the licence requirements.

They also issued three emergency prohibition orders on homes where conditions were so dangerous that they risked the safety of their tenants. Alternative accommodation was found for the occupants.

Ten empty properties were identified, and the team will now work to identify the owners in an attempt to bring them back into use.

The Fire Service issued a Prohibition Notice on one HMO due to it not being fitted with smoke detectors. This was later lifted after the landlord addressed the issue, and an Enforcement Notice with Action Plan served to ensure compliance in the future.

Additionally, a number of referrals were made to the Prevention Team for Home Fire Safety checks requested by residents, and two referrals for joining the Fire Service as firefighters.

A referral was also made to the Council’s Licensing Team due to possible breaches of licensing conditions by a shop in the area, and Northamptonshire Highways was alerted to issues with poor parking and vehicles driving the wrong way down Salisbury Street.

The council’s waste contractor Veolia also removed a number of piles of fly tipping from streets in the area.

People in rented accommodation deserve to live in safe and properly managed homes. Whilst most landlords in West Northamptonshire take their responsibilities seriously, there are those who do not, and we are committed to identifying those landlords and taking action where appropriate.

Working with our partners on operations such as these offers an important opportunity to improve conditions for residents, and to speak to people about any issues they may be facing so that we can work together to tackle them.Cllr Adam Brown - Portfolio Holder for Housing on West Northamptonshire Council

These days of action were a really great opportunity to learn more about local concerns and to gather intelligence.

One of the really positive things that came out of it was hearing from the community that things have gotten much better recently, in terms of crime levels and the amount of anti-social behaviour they are seeing.

This was really heartening to hear as it shows that we are making a difference.

I hope it reassures people that we are out and about, showing a police presence in their local area, and that they will feel more empowered in the future to report things to us as a result.PC Polly Egerton-Scott

Fire Protection Officers used this opportunity to provide residents and landlords with fire safety advice and support, as well as reinforcing fire safety legislation. A number of premises were flagged as falling short of fire safety regulations and action was taken to address these.

We want to work with businesses and landlords to ensure that people are safe and properties are protected, but we will also use our authority to issue notices when fire standards pose a serious risk to life.Scott Richards, Head of Protection at Northamptonshire Fire and Rescue Service