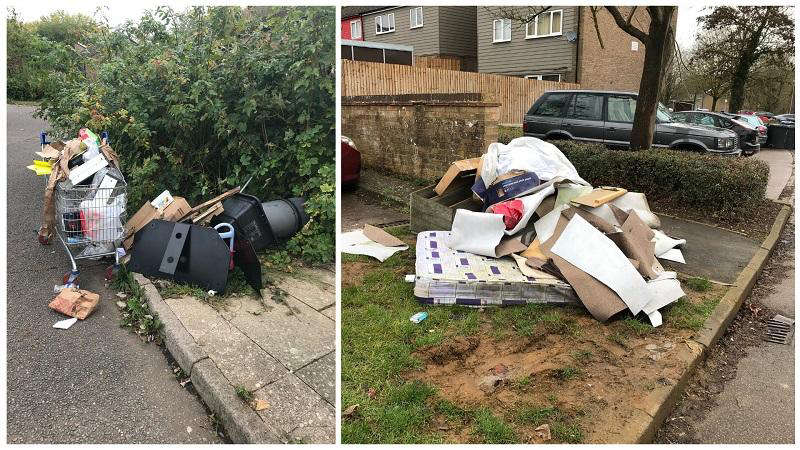 Two people have paid the price for dumping their rubbish in their local community following successful prosecutions by West Northamptonshire Council.

At Wellingborough Magistrates’ Court on Tuesday last week (26 April) were Jeffrey Gent and Sandors Kozlovskis, who were each ordered to pay more than £1,000 in fines and court costs after admitting to separate charges of fly-tipping in Thorplands, Northampton.

Both men had originally been issued with £400 fixed penalty notices by the Council’s Neighbourhood Wardens, but found themselves in court after failing to pay.

Gent (56) admitted fly-tipping after household waste including a mattress and old carpeting belonging to him was found dumped near his home in Sidebrook Court last March. Magistrates ordered him to pay a £400 fine, costs of £620, plus a £40 victim surcharge.

Kozlovskis (20), of Nicholls Court was originally issued with his fixed penalty notice after a shopping trolley full of waste was found abandoned in Far Meadow Court in October last year. He was fined £400 by Magistrates, and ordered to pay costs of £600 plus a £40 victim surcharge.

People shouldn’t have to put up with these anti-social offences taking place in their communities, and I would like to thank the Neighbourhood Wardens whose diligence led to the offenders paying the price for their actions.

Our Council does not tolerate fly-tipping, and successful prosecutions such as these should send out a clear message that we will take strong action against offenders, including through the courts if necessary.Councillor David Smith, Portfolio Holder for Community Safety and Engagement, and Regulatory Services