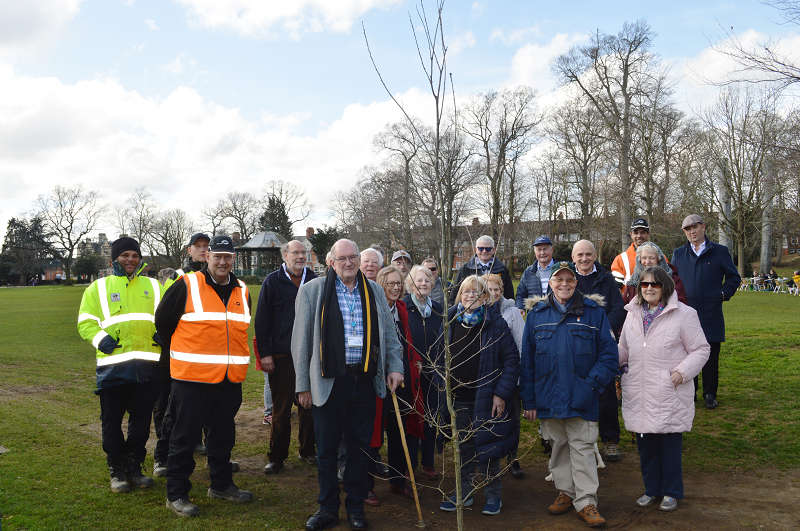 A commemorative oak tree has been planted in Abington Park to mark the Queen’s Platinum Jubilee year, through the Queen’s Green Canopy tree planting initiative.

The Friends of Abington Park, the council’s grounds maintenance contractors Idverde and the park’s rangers arranged the planting close to the park’s aviary and were joined by Councillor Phil Larratt, Cabinet Member for Environment, Transport, Highways and Waste.

Residents, schools, businesses and community groups across the United Kingdom are being encouraged to mark the Platinum Jubilee by planting trees, which can then be pinned on the Queen’s Green Canopy interactive map, providing a digital record of the Jubilee tree planting projects, along with a photo of the trees and the names of those who planted them.

Councillor Pinder Chauhan, who is helping to coordinate the Queen’s Green Canopy planting efforts in West Northamptonshire, said: “Abington Park is extremely popular and is steeped in history – it opened to the public in June 1897 in celebration of the Diamond Jubilee of Queen Victoria - so it was fitting to plant the oak at the park in commemoration of Her Majesty’s Platinum Jubilee.

“The current tree planting season finishes at the end of March, so there is still time for people to take part in the Queen’s Green Canopy and plant their trees. And if you’re short of time this month, the planting season starts again in October, through until the end of the year.”

Towns, parishes and communities are also being invited to get involved in this year’s Jubilee celebrations across the 2 – 5 June bank holiday weekend, from lighting beacons to hosting street parties and big lunches.

West Northamptonshire Council is organising a packed weekend of activities, including official beacon-lighting ceremonies on the Bank Holiday Thursday, a countywide jubilee pageant through Northampton on the Saturday and a Big Lunch at Delapre Abbey on the Sunday.

Further information about the Jubilee arrangements and the Queen’s Green Canopy can be found on the council’s website.