Red carpet rolled out for launch of Daventry's new cinema 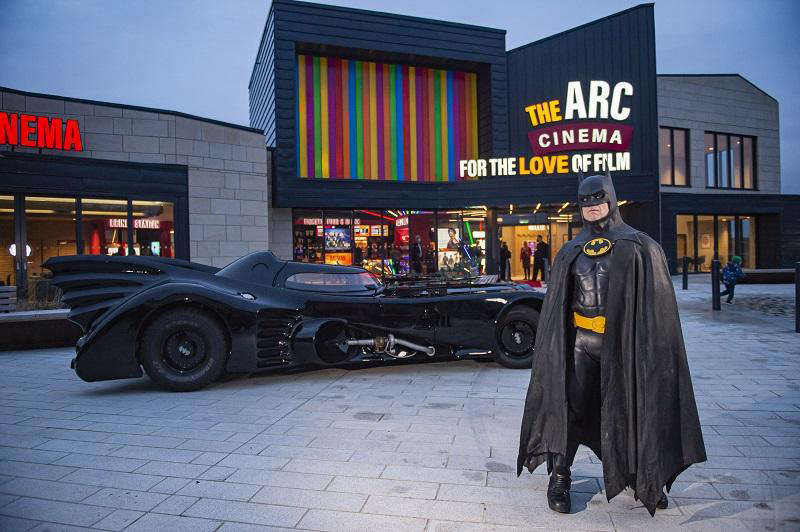 Daventry's new cinema was opened with a red carpet event with members of the council and other invited guests in attendance.

The guests were treated to a preview screening of the much-anticipated film The Batman starring Robert Pattinson, and Batman and his Batmobile were on hand to welcome guests to the red carpet as they arrived at the cinema.

The opening of The Arc Cinema marks the return of cinema to Daventry after a gap of over 20 years.

Rita Harding, the widow of John Harding who was the manager and projectionist at both the Rex and The Regal Cinema in Bowen Square, was on hand to officially open the new facility.

The cinema opens to the public today (Friday 4 March).

We're absolutely thrilled to see this wonderful new cinema open its doors to the people of Daventry and the surrounding area. The Arc Cinema have done a great job creating a really impressive, high-quality facility, and I can't wait for the local community to experience it.

With a new public square, and with two restaurants also due to open in the coming weeks, Mulberry Place offers a fantastic new leisure destination for the local community to really be proud of.

We're delighted to have been able to deliver this project, which will also provide a huge boost to the local economy, creating jobs, increasing footfall in the town centre and helping to attract new businesses and investment.Cllr Lizzy Bowen, Cabinet Member for Economic Development, Town Centre Regeneration and Growth

The foyer space is purposefully designed to be a bright and airy space for relaxation and the venue is licensed, allowing visitors to enjoy a beer or glass of wine while watching a film.

The cinema will show the latest blockbuster and independent films as well as broadcast screenings of opera, ballet and theatrical productions.

It was fantastic to see people in the cinema for the first-time last night and it was very clear that everyone had a great time – our luxury reclining seats and new self-serve Coke Freestyle machines were particularly well received.

Daventry is a wonderful place to live and having access to a local cinema will be great for the community. The Arc will make visiting the cinema, to watch the best films on offer, way more accessible and be a great boost to the town centre.Wendy Goldie, Cinema Manager

Access for all is key to The Arc Cinema’s offer, with all screens wheelchair accessible. The cinema will also offer subtitled screenings, kids’ clubs and parent and baby screenings.

The Arc Cinema is an Irish cinema operator that is currently opening a number of sites in the UK. Established in 2014, they specialise in creating very high-quality cinemas to serve local communities.