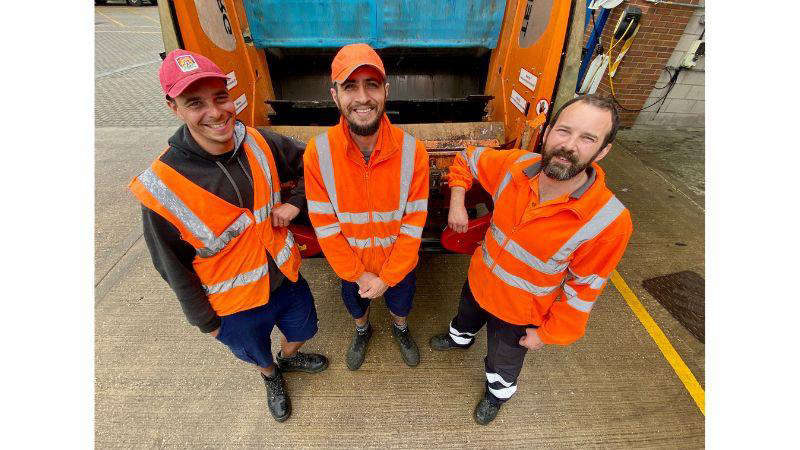 A quick acting waste and recycling crew averted an expensive and messy clean-up after a battery nearly set fire to a bin lorry this week.

West Northamptonshire Council (WNC) is now reminding residents of the dangers of throwing batteries into their general waste and the fact that residents have a kerbside battery recycling collection.

The first sign of danger was spotted by loader Leighton Cousins who saw flames as he emptied a black wheelie bin in Middleton Cheney and raised the alarm.

Driver Ian O’Driscoll immediately turned off the lorry and grabbed an extinguisher on his way to the rear of the vehicle.

After discharging the extinguisher both could see the smouldering battery and removed it.

Cllr Phil Larratt, WNC Cabinet Member for environment, transport, highways and waste, said: “It might not seem like much, but if that fire had taken hold, they might have been forced to eject their load or risk losing a very expensive bit of equipment, not to mention the risk of injury or worse.

“Then there’s the call out to the fire service, a hazardous clean-up, and a lorry out of action which has a knock-on effect on workloads and overtime costs.

“I’ll give the resident the benefit of the doubt and say it was a momentary lapse that, had it not been for a quick-thinking crew, could have cost the tax-payer tens of thousands of pounds.”

The battery is thought to have been from a cordless vacuum cleaner. Excluding car batteries, WNC will collect all types of household battery if placed in a bag on top or next to the recycling bin.

In a second incident on the same day a crew driving behind another bin lorry noticed smoke coming from it and again a fire extinguisher had to be used to put out the fire which was thought to be caused by hot ashes.

Cllr Larratt added: “It might be a bumper weekend for barbecues, and I want everyone to remember they need to be very certain ashes are fully extinguished and cold throughout before they go anywhere near a wheelie bin.”

For more information on what goes where, visit the council's waste and recycling pages.